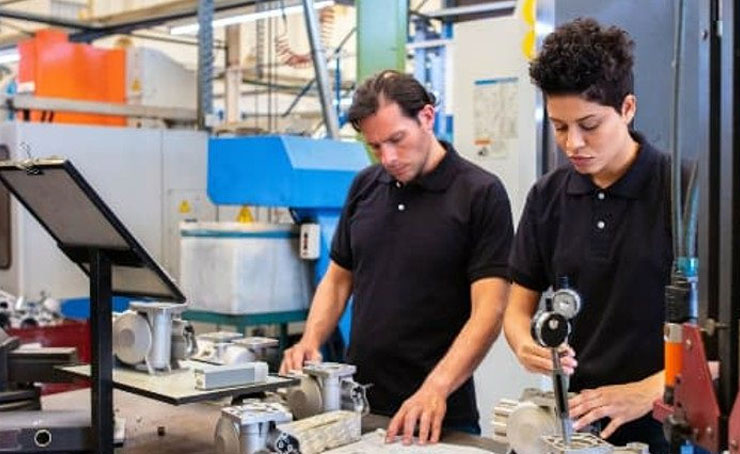 Throughout the country, schools are doing great work building the manufacturing talent pipeline. The common denominator when it comes to producing career-ready graduates is a close collaboration with local manufacturers.

“If you don’t ask the end user what they want, the program will be a waste of time and money,” said Rusty Inman, executive director, John Jay Center for Learning based in Portland, Indiana.

Inman said that when he was hired by John Jay back in 2013, his first mission was to propose a use for an unused 15,000 square foot space in the building’s basement.

“Fifty percent of the jobs in the county are manufacturing so I started there,” said Inman, who grew up in the area.

Inman made appointments with eight local employers to ask: “What can we do for you?” The first four companies all had the same response, so he cancelled the other four to “go to work.”

Clearly, the most pressing issue was around finding and developing a skilled workforce.

“It was a perfect storm between baby boomers retiring, fewer high school shop classes, and small family farms bought out by big farms,” Inman said. “There was a shallow talent pool with everyone stealing from each other. What would things look like in 10 years?”

Inman partnered with now Jay School Corporation Superintendent Jeremy Gulley to build a “sector partnership” that would help address the workforce issues in the community. Together, they brought the manufacturing industry together locally to build a plan and curriculum – and landed substantial grants for funding.

Working together with manufacturers and other local educators, John Jay now offers associates degrees and professional and technical certificate programs as well as college credit courses that apply to degree programs for Ivy Tech and Purdue Polytechnic Institute. They are also a site for the Indiana High School Equivalency program and Adult Basic Education.

In July 2021, John Jay launched its SkillsTrac training program as a certified Adult State Earn and Learn (SEAL) program. Started around 2017, the industrial training program was designed with input from manufacturers throughout Jay, Blackford, Wells, and Adams counties, along with added involvement from companies in Ohio.

The curriculum is based on Tooling U-SME’s online courses.

“Manufacturers really wanted that Tooling U-SME part,” said Inman. “Students can learn at their own pace, on their own time, versus a 16-week college course with lectures and lab.”

At John Jay, lab time is adaptable, too, as the lab is open during the day and on select evenings during the week. This flexibility allows employees to train around their work schedule.

“By partnering with the end user to create and deliver quality education and training, we are enabling students to better their lives financially and positively contribute to the communities in which they work and live. We are succeeding in our mission and lives are being changed through our work,” said Inman.

Since 2013, nearly 300 students have attended John Jay programs, and landed good jobs. Manufacturers know that students going through the program are qualified.

One local high school student, with support from his mom and school advisors, entered the SkillsTrac program, using his graduation money and scholarships to pay for his education. He got through only two of the five parts of the program before running out of money.

To help, Inman said he would shop around the student’s resume. Despite the student having little to no manufacturing experience, he received seven interview offers and, ultimately, landed in a maintenance apprenticeship program that helped pay for the rest of his training. Employers liked that the student had paid his own way through the program, feeling that showed great commitment. They also knew he would receive a strong skills base at John Jay.

Students of all backgrounds are being trained by John Jay to fill the local manufacturing talent gap including women, veterans and those speaking English as a second language.

Inman added that having Tooling U-SME courses available in Spanish is a great asset to the program.

“The most important thing we did was gather other communities together to talk about the collective challenge and solutions,” said Inman. “Everyone was on board, so collaboration was easy.”

Contact us to start building your workforce development program today.